About Rick  ...Rick Rubarth was raised in a family that played music together around the living room. Later, Rick worked as a professional musician in Ann Arbor, Detroit, Baltimore and the tri-state area in Colorado. He learned early on how to repair and maintain his own instruments. Later he would build them for his own use.

Rick's highest qualification as a harp builder is that he is a musician. To that end, Rick loves instruments that respond, breath and project. Good dynamics and feel are essential to all his harps. 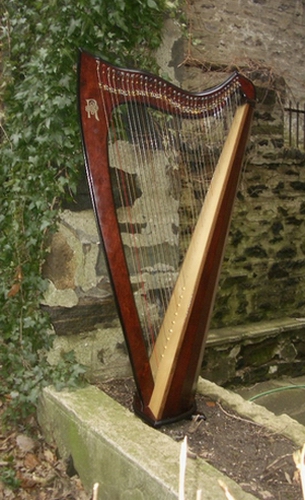 I derive a great deal of pleasure and satisfaction from the conception, design, construction, and refinement of my harps. For many years, I have been building harps two at a time with only one variable between them so that I can truly compare and tweak here or change a design element there. Does this harp sound better than that one?  Which one "sings"? This is called A-B testing. Through years of this kind of testing, theory has been replaced with knowledge.

"I think" has been replaced with "I know" at a huge cost in terms of building and burning. But twenty years of experimental building pays off when my customers recognize what they love about their R-Harps, I just have to smile because I know those qualities were deliberately placed there in that instrument.

All the harps I produce now are the best I've ever made. I am still so thrilled when the sawdust settles and I hear my customers produce beautiful music on my creations. These are the moments that make all the hard work worth while.